In July 2021 Humanists Victoria (HV) contributed to a ‘community consultation’ by the City of Boroondara, objecting to the practice of praying at the start of every Council meeting. A petition to abandon the prayer, bearing over 1,000 signatures, was rejected by Council. In its defence, Council claimed that no court had found such a prayer illegal, and participation was optional. Since then a group, Citizens for a Secular Boroondara (C4SB), has formed to pursue this issue further. 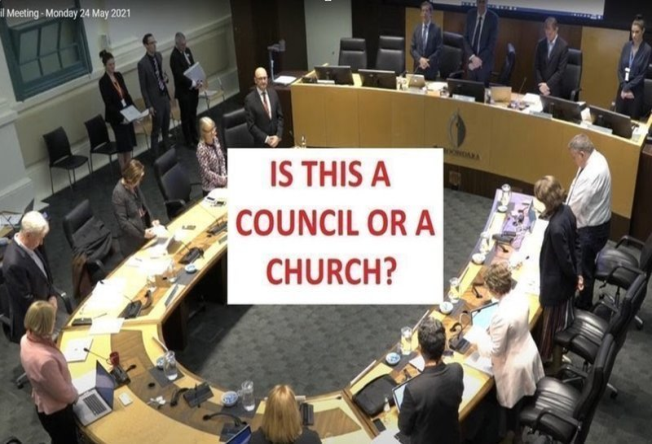 The current prayer is a Christian one. This is divisive in a multi-cultural, democratic society which contains people of many faiths, including a growing contingent who are not religious. According to the Australian Census the Christian affiliation is in long-term decline, reaching 52 percent of the population in 2016; while those declaring ‘no religion’ are steadily increasing, reaching 30 percent in 2016.

HV and C4SB are not against religion, in its place. Freedom of religious expression is important, but it must be bounded by law. Indeed, a clear separation between religion and government is in the public interest. As secularists, we are convinced that prayer has no place in government.

There are 79 Councils in Victoria. Research, carried out by Citizens for a Secular Boroondara, has shown that 39 of these recite a Christian or monotheistic prayer at the start of their meetings, while 2 have an interfaith arrangement, in which the prayer rotates between different faiths. However, 38 have dispensed with prayer, beginning instead with an acknowledgment of Country. What is the practice in your area?

Legal opinion from Monash University suggests that council prayer may be unlawful, as was found in a 2012 case in Britain. This has yet to be tested in Australia. Australian local councils can act only if empowered to do so by some law. Their situation is unlike that of individuals, who can do anything that is not expressly prohibited by law. [Beck, Luke. ‘Our Father who art in Town Hall: Do local councils have power to pray?’ Alternative Law Journal 46(2), 128–133 (2021).]

For more information, e-mail the citizens’ group at citizens4secularboroondara@gmail.com

Fiona Patten, member of HV and Member of the Victorian Legislative Council, has reached an agreement with the Labor government, to abandon the use of the Lord’s Prayer in both Houses and to replace it with a short period of silent reflection, should Labor be re-elected in November 2022.

2 Responses to Who Needs Prayer at Local Council Meetings?