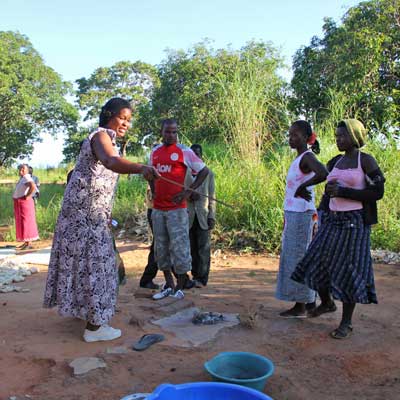 During her undergraduate science degree, Kathy focused on microbiology. A Master’s degree in Engineering Science followed. While working in the Sydney Water graduate program, she decided that she had found her calling and during the past decade she has worked with communities in East Timor, India and Somalia, facilitating training to improve sanitation and hygiene, and empowering local leaders to continue the battle.

The global statistics about sanitation, World Health Organisation (WHO), 2015

Millennium Development Goal 7 (MDG) is aimed to halve the proportion of the population without sustainable access to safe drinking water and basic sanitation by 2015. Considerable progress was made, reducing the percentage of people without access to a basic toilet from 46% to 32%, but as the above data shows, one in eight people still defecate in the open.

Improving sanitation and hygiene would help to:

In 2010, the United Nations General Assembly passed a resolution declaring ‘safe and clean drinking water and sanitation a human right essential to the full enjoyment of life and all other human rights’. Ban Ki-Moon, UN Secretary General at that time, amplified this, saying that safe drinking water and adequate sanitation were crucial for poverty reduction, crucial for sustainable development and crucial for achieving any and every one of the Millennium Development Goals.

The Sustainable Development Goals (SDG) have been formulated to continue the work started with the MDGs. The aims of SDG 6 are, among others, to achieve equitable and universal access to safe and affordable drinking water and access to adequate and equitable sanitation and hygiene for all by 2030. Defecation in the open will end, as a consequence. Special attention to the needs of women and girls and those in vulnerable situations, such as the disabled, the elderly and social minorities will be necessary to achieve these goals.

Kathy has worked with Red Cross and UNICEF in her endeavours in this field and in particular with the W(ater)AS(anitation)H(ygiene), or WASH, program. She emphasised the critical importance of local community involvement in WASH workshops. However, many players are necessary to achieve the goals at stake, including multi-lateral organisations, private corporations, non-profit aid agencies, finance institutions and academic departments.

She was the WASH Team leader in Rajasthan, India, for two and a half years and was the WASH Cluster Co-ordinator for close to two years in Somalia during the famine there. She has recently written a handbook to guide Pacific communities to protect and improve sanitation during emergencies.

She emphasized that messages to encourage people to use toilets need to be culturally appropriate and that a collaborative approach is essential. Simply building or supplying toilets is not enough. They may not be cleaned, maintained or used safely. Behavioural change is the key to progress. Understanding the drivers for change is a complex process, with input from the local community about its values and needs essential. Empowering local leaders to guide this is at the heart of success in the initial stage and also the key to sustaining progress.

Hygiene or handwashing is another goal of the WASH program. UNICEF estimated that 47% of households in the Least Developed Countries in 2017 did not have access to handwashing facilities. Similarly, in a WHO/UNICEF survey of low and middle income countries in 2015, 35% of health care facilities did not have soap and water for handwashing. Handwashing with soap and improved hygiene practices are simple, effective ways to save lives and improve health. In particular, they reduce the disease burden from diarrhea, worm infections, pneumonia and other respiratory conditions, and trachoma.

Another SDG target, which is allied, aims to improve water quality by 2030 by reducing pollution, increasing recycling and halving the proportion of untreated wastewater. This will require addressing environmental concerns and protecting and restoring water-related ecosystems. Once again, increased international support, including access to new technologies, will be needed.

Ultimately, success in improving sanitation and hygiene in less developed countries will foster not only health and well-being, but will help enhance social opportunity and productivity and thereby assist in reducing poverty.

What can you do?