Humanism – an antidote to a post-truth world 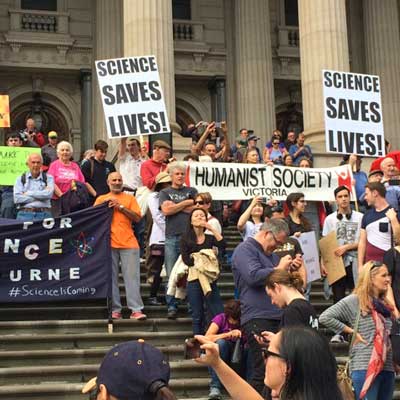 Does Humanism offer the best framework for non-religious people living in today’s world?  I believe it does, provided we are prepared to think deeply about the issues we confront in daily life and not just react to them using past experience or emotion.

The essence of Humanism is to place value on being ethical and responsible, showing compassion, being a contributor to community life and being guided by evidence-based information.  On this last important value, Humanists try to examine the current facts of an issue before taking a position. Humanists have adopted this thoughtful attitude because we have been unwilling to accept hearsay and ancient writings, as reliable sources of information.

It is generally agreed that the best evidence-based method humans have devised for gaining knowledge is science. Based on observation, experimentation and peer review, science has enabled humans to greatly enlarge our understanding of ourselves and the rest of the universe.  Such gains in knowledge have been the result of deep thinking.

Sadly the future of science is under threat for several reasons. Fewer bright young people are attracted to making a career in the sciences, and economic and political interests frequently ignore or pervert the evidence provided by science.

Of further concern for the future of science is the disturbing news that we are living in a ‘post-truth’ world.  Declared the word of the year by the Oxford Dictionaries, post-truth is defined as:

As many have already commented, post-truth seems an apt description of a world in which the host of a TV reality show and verbal blusterer will be the next president of the USA.

What is even more worrying is that there is abundant evidence we may indeed be living in a post-truth world.  Recent research has shown that when people make choices they usually fall back on past experience and intuition, rather than giving the matter any deep thought.  This preference for making gut responses is well documented in Daniel Kahneman’s best-selling book, Thinking, Fast and Slow (2011).  For most people, most of the time, fast gut-response decisions work well enough.  Slow, deep thinking requires effort which many of us prefer to avoid.

Our unwillingness to engage in deep thinking has led to humans being described as ‘cognitive misers’, meaning that under most circumstances we will opt for the familiar, easiest solution.  While this works well enough under ‘normal situations’, there are times when deep thought is required.  So without at least some people doing some deep thinking humans will not able to solve complex problems or come up with fresh ideas.

Of further concern is the reduction in funding for scientific research, combined with the denigration of experts such as scientists.  Hence a need to feel concerned over the future of science, and the future of our species.

Hopefully Humanists will continue to value deep thinking and be advocates for evidence-based information as provided by science.  Using such a Humanist approach will hopefully enable our species to negotiate beyond a post-truth world.

Share/Like this page:
Our way forward? Humanism and humanists: A brief introduction