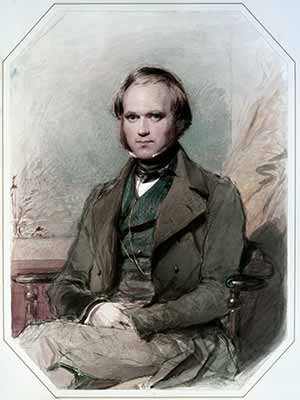 Around the world, Humanists and other freethinkers celebrate Charles Darwin’s birthday as Darwin Day. We do it to remember his great contribution to human knowledge, as set out in On the Origin of Species by Natural Selection, first published in 1859. This book gives a naturalistic explanation for the great diversity of life on Earth. By proposing a mechanism of how species can change or evolve over time, Darwin gave people who doubted god’s existence a better, alternative explanation for the diversity of life forms.

Darwin was born on 12 February 1809, the fifth of six children to Susannah (née Wedgwood) and Robert, a successful society doctor and financier. Following in his father’s footsteps he enrolled in the Medical School at the University of Edinburgh in 1825. However, the brutality of surgery without anaesthetics so discouraged him he neglected his studies, becoming instead engrossed in the activities of local naturalists.

Darwin’s interest in the natural world led him to a berth on HMS Beagle as Captain James FitzRoy’s travelling companion. The Beagle’s mission was to map the South American coastline. During this five-long-year voyage around the world (1832–36), Darwin collected specimens, living and fossilised, and made detailed observations of a diversity of life forms, particularly in South America and the Galápagos Islands.

Upon his return, Darwin married a cousin, Emma, and settled into a quiet family life in Downe, Kent, where he wrote up his voyage notes and continued to investigate the natural world. Over many years, he gathered evidence and formulated a natural mechanism for how species could change or adapt over time to altered environmental conditions. He called the mechanism ‘natural selection’.

It was a mechanism for change that was new, not the idea that species could change or evolve. This had been suggested over 2,500 years ago by the ancient Greeks and again in Darwin’s time in The Vestiges of the Natural History of Creation (1844). This book, anonymously authored, argued that the great diversity of species had arisen naturally. It created a huge controversy in Victorian England, as people argued vigorously for and against nature versus god the creator. Most of Darwin’s scientific peers rejected The Vestiges‘ central thesis about the evolution of life on Earth, hence Darwin’s reluctance to publish his own version.

However, when Alfred Russell Wallace, a naturalist and collector wrote to Darwin from Malaya outlining the same idea of natural selection that Darwin had been working on for years, he recognised the need to publish. Darwin realised that what he needed to do was to convince his scientific peers that species could change over time by natural means, as opposed to being all specially created and immutable.

Darwin systematically made the case for natural selection by discussing familiar examples from artificial breeding, e.g., sheep, dogs and pigeons. He then argued that just as breeders select for certain preferred features, so the natural environment ‘selects’ features that aid survival.

That new species arise through selection of the individuals with the best adaptive features in association with the isolation of different breeding populations is now basic biology. Darwin was the best known scientist who first outlined this mechanism for the evolution of life forms in a most convincing way.