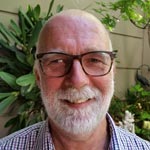 24 Nov 2018 – Rod Bower (pictured) was elected President of the Humanist Society of Victoria at the 2018 HSV Annual General Meeting held on 22 November. Rod has been a HSV member for about ten years, being active on various campaigns. These include removing Special Religious Instruction from public schools, organising two Global Atheist Conventions and the CAHS Convention in Melbourne, and changing the form of the ABS Census question on religion. Rod has also contributed to other kindred organisations, such as the Rationalist Society of Australia, the Progressive Atheists, Getup and the Reason Party. He thanked the outgoing President, Rosslyn Ives, for her many years of dedicated service and outgoing committee members, Mary Bergin, Peter Hotchin and John Russell. New committee members, Steve Halliwell and Catherine Stahel, join Rosslyn Ives and Meg Paul on the committee. Leslie Allan was elected Vice President and Bogdan Skomra was elected Treasurer. HSV also recently welcomed on board its new Community Engagement Officer, Sue James, and bestowed on Halina Strnad honorary life membership for her outstanding effort over many decades.

18 Nov 2018 – Following the first informal get-together over dinner of the Melbourne-based Ex-Religious Support Network (ESN) on 31 October, the Meetup group met formally for the first time on 18 November. Eleven members met at a convenient location close to the city and public transport. The convenor, Leslie Allan, began by welcoming members, who then shared their personal experiences with religion and its impact on their lives. The open and honest testimonials struck an emotional chord with everyone present. The depth of engagement was so high, the meeting had to defer Joe Sehee’s talk on ‘Meaning in a World without God’ till the next meeting. Leslie closed the session with an overview of the various secular groups in Melbourne and of the resources available to people leaving their religion. The Humanist Society of Victoria gives special thanks to Rod Bower and Brian Jones for helping out with this event.

10 Nov 2018 – At its November 2018 meeting, the Humanist Society of Victoria Committee bestowed honorary life membership on Halina Strnad. Halina has been a great stalwart of the Society and national Outstanding Humanist Achiever (2002). She joins a rare group of treasures, comprising Marie Hodgens, Howard Hodgens and Lalita Brond.

7 Nov 2018 – The Humanist Society of Victoria has now formed a new Facebook discussion Group as an adjunct to the recently formed Melbourne Meetup Group. The aim of the new Facebook discussion Group, named the Ex-Religious Discussion Group, is to provide a forum for people who have left their religion or are leaving their religion. In this safe forum, members can discuss openly with other apostates their experiences, challenges and opportunities for finding meaning and purpose in a godless world.

While the existing Meetup Group, the Ex-Religious Support Network (ESN), is a private Group, this new Facebook Group is a public group. Unlike the Meetup Group, conversations in this new Group are visible to the world. The aim of the new Group is to generate broader interest and discussion on leaving religion and to direct locals to the Melbourne-based Meetup Group.

29 Sep 2018 – Following on from Steven Unthank and Lara Kaput’s address to the Humanist Society of Victoria (HSV) in June 2018 on Supporting Survivors of Religion, HSV has now established a support group for people leaving their religion. This group is called Ex-Religious Support Network (ESN) and is set up as a Meetup group at www.meetup.com/Ex-Religious-Support-Network. The lead organizer is HSV committee member, Leslie Allan. The group opened for members on 28 September 2018 and welcomes people coming from all religions, denominations and sects. The Organizer also welcomes offers of support in running the group from other HSV members and members of other freethought organizations. For more information, contact Leslie Allan at esn@vichumanist.org.au and download the Ex-Religious Support Network ESN information pamphlet.

1 Jun 2018 – HSV has donated $1,000 to Science Teachers’ Association of Victoria to help with the running of the 2018 Science Talent Search. By becoming a Gold Sponsor, HSV will be able to have a one-half page advert about the Society in the 2018 STS Bursary booklet. HSV has also donated $1,000 to the Asylum Seeker Resource Centre, an action in part motivated by the recent budget cuts made in this body’s annual funding. We encourage members who feel passionate about this charity to make individual donations – either via the Asylum Seeker Resource Centre web site or by snail mail to 214–218 Nicholson St, Footscray, Vic, 3011.

1 Jun 2018 – Val was an active member for many years, attending public lectures and social events. She had a good life, first with her husband, now deceased, and from 1980 teaching physics and general science at Lauriston girls’ school. She was an active member of the Science Teachers’ Association of Victoria, where Rosslyn Ives first met her. However, since moving into a retirement home her involvement ceased. HSV extends sympathy to her children, Phil and Margaret, and their families.

1 May 2018 – This year’s Council of Australian Humanist Societies (CAHS) Convention was held in Adelaide on 13 to 14 April 2018. Rosslyn Ives and Stephen Stuart were our delegates to the 53rd annual general meeting of CAHS, which was chaired by Lyndon Storey as president and acting secretary. HSWA did not participate, as its committee was inactive, but ACTHS was represented. HSV put two motions on notice (see April VH): HSV1, concerning instructional materials on Humanism, was carried; HSV2 was passed in a less strenuous form, ‘That CAHS coordinate and support actions to oppose religious chaplaincy in State schools’. Then a late motion from HSQ, ‘That CAHS act to facilitate co-operation between members of humanist societies with common interests by helping to establish “affinity” groups for interested members; CAHS to develop process for establishing affinity groups’, was received and approved. The public session of the Convention carried the theme, ‘Equality is for everyone’. Invited speakers covered various aspects of social action, particularly strong contributors being Uncle Lewis Yerloburka O’Brien, Chris Schacht and Rodney Croome. At the Convention dinner, Anne Levy AO (AHoY 1986) made the presentation of Australian Humanist of the Year 2018 to Gillian Triggs, the former Human Rights Commissioner, who gave a stirring address in reply. 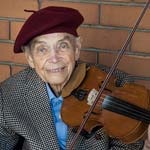 1 Mar 2018 – Harry Gardner was a long-time and very active HSV member. He was a committee member in the 1970s, serving as President in 1973. At that time, he played a key role in advocating for the removal of religious instruction from state schools. Although humanists were unsuccessful on this matter in the 1970s, experience from that time fed into a further successful campaign in the 2000s. Harry spearheaded this renewed action by creating ethical education lessons, which he promoted with passion and vigour. His activity was undoubtedly influential in leading to the State government removing Special Religious instruction from classroom time and setting up the study area, ‘World Religions and other World Beliefs’, including Humanism. Harry’s work on ethical education earned him the award of Outstanding Humanist Achiever in 2012.
Having been diagnosed with cancer, Harry had a very personal interest in the availability of legalised voluntary euthanasia. So, when the Andrews government signalled its intent to legalise physician-assisted dying, Harry was galvanised into action. During 2017, he personally visited nearly 50 Victorian MPs to argue that they should vote for physician-assisted dying or VAD Bill. His personal approach persuaded quite a few MPs who were wavering to vote ‘yes’.

1 Mar 2018 – HSV is entering into fraternal communication with North Yorkshire Humanists, following the visit to Melbourne in December by Professor John Adams of Harrogate. We shall swap Humanist news and encourage mutual visits. So, if a Victorian Humanist finds herself in York or Harrogate, she should remember she is among friends and seek them out. Committee will let you know if a visit from North Yorkshire is imminent.