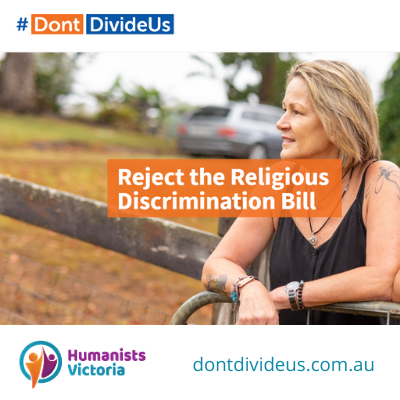 Former Justice of the High Court, The Hon Michael Kirby AC CMG believes that the Religious Discrimination Bill should not proceed as the new #DontDivideUs campaign is launched against the government’s proposed laws today.

“All Australians – whether they practise a religion, are ‘lapsed’ or belong to the quickly swelling ranks of those declaring ‘no religion’ – could be worse off on grounds of religious belief.”

“This is not a bill that protects Australians from discrimination on religious grounds. Instead, it actively facilitates intolerance and will work to divide rather than unite Australians.”

“The government should heed the chorus of opposition to this law and abandon this ill-considered measure” Mr Kirby said.

Mr Kirby is a patron of the Rationalist Society of Australia, which is part of an alliance of free-thought organisations that has banded together for the first time to seek a national charter of human rights and responsibilities, instead of the Religious Discrimination Bill being pursued by the Federal Government.

President of the Rationalist Society Dr Meredith Doig said the problem with the Religious Discrimination Bill is that “it will divide the community on religious grounds, instead of bringing us together in the spirit of Australia’s traditional ‘live and let live’ tolerance.”

“This is not an anti-discrimination bill; it is a bill which actively enables discrimination on the basis of religion,” Dr Doig said.

“Our groups represent the views of millions of Australians who do not identify as religious – thirty percent of the population ticked ‘No Religion’ in the last census, more than any single religious group.

We intend to invest resources to mobilise our membership and the wider Australian community by raising awareness about the dangerous and far-reaching consequences of this Bill.

“When you look at the real-world impact of these laws, it’s quite extraordinary – it would result in all sorts of irrational outcomes such as women being denied contraception and people with disability being denied stem cell treatment.”

The campaign website www.dontdivideus.com.au lists a series of real-world impacts of the Bill which also include children being blocked from attending early learning centres if their parents don’t attend church.

“This is not the sort of Australia we want to live in. Religion can be a divisive issue at the best of times, but we should ‘live and let live’, not turn every religious debate into a court case,” Dr Doig said.

“You only have to look at the reaction of the community so far to see that this is a divisive Bill and it should not be supported.

“The separation between church and state is one of the most important features of our system of government in Australia and this Bill compromises that principle.

“These laws will pit Australian against Australian and divide us just when we need to pull together to face unprecedented national crises. This Bill is unnecessary, unwelcome and divisive, and our law makers should reject it outright.”

The proposed Religious Discrimination Bill affects everyone. It will make it easier for people to impose their beliefs on others. It will allow people to discriminate against their fellow Australians.

The laws would override all federal, state and territory anti-discrimination laws in the country, as well as work health and safety laws, meaning all laws which currently protect people from discrimination would be compromised.

If the Morrison government passes these laws: