Beliefs and observations of a Humanist

As a scientist, I cannot deny that the miraculous rules of physics and chemistry, which have governed the beginnings and evolution of the Universe, the balance of elements, the development, perseverance and evolution of life, are all extraordinary in the extreme. Clearly without them I would not be writing these words, and it may be that they are just one of many alternative Universes, most of which are different to the sort of Universe we know. It is hard to believe they arise from pure chance, but equally hard to understand the creative force of even greater complexity which could create them.

If you want to call the Laws of Physics “God”, I can accept that proposition, but I have seen no indications in my lifetime that they can be varied by intervention to create special outcomes for local management purposes. If there were a god that performs miracles in order to convince us mortals that it exists, it surely would not be afraid of performing some really convincing ones in the modern era, which could be subjected to credible scrutiny. I think this is a critical distinction, because an interventionist god may inspire an appropriate level of respect and admiration from its creations, but I fail to see how adulation would benefit the Laws of Physics.

The other concept of “God” I am attracted to is the Spirit of Humankind, which seems to me to be an extension of survival of the species. I note that humans seem to be able to cope with the death of small numbers of unrelated individuals, but react with increasing alarm to disasters in proportion to the numbers of deaths, and to the concept of humankind being destroyed completely with sufficient universal concern to have avoided global nuclear wars – so far, at least. I believe there is a fundamental spirit of potential goodwill towards our fellow beings, which moderates as we increase the radius of connectedness from family to community to group to nation to Earth dweller.

However, I also believe this potential needs considerable cultivation to become an effective force, and in fact the progression over time from tribe to village to city dwelling has probably caused a major setback. This is an area where from my observation many religious communities have been very effective. Their traditions of music, prayer, shared values, and network support together create a sub-community which to greater or lesser extent adds to the lives of the individuals. I think in this area they are way ahead of the cold rational logic of the Humanists, to whom I was attracted because they seemed to offer a step in the right direction at least compared to the atheists. I think we should look seriously at our ineffectiveness in building a true Humanist community as a major factor in limiting our ability to attract new members, and try to identify the effective strategies that other organisations use to create a sense of support and involvement amongst our members, and the wider community.

I firmly believe we need some projects to work on together to build the sense that we actually achieve something tangible and significant, as well as visible to the community. Any ideas?

(At the time of writing, October 2011, David is being treated by wonders of modern medicine for leukemia. Ed) 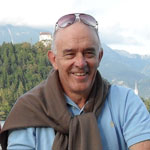 Share/Like this page:
Understanding how we cause climate change Social Humanism