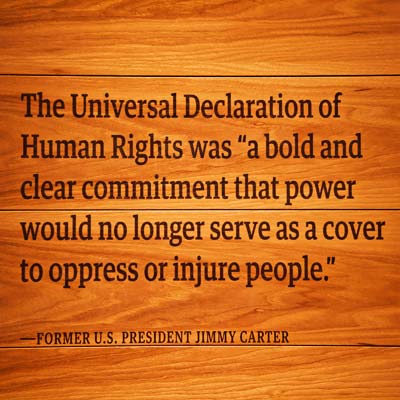 Humanists value human rights as set out in the declarations of the United Nations. And it is worth recalling that several people involved in setting up
the United Nations in 1945 were also key participants in the 1952 formation of IHEU, now known as Humanists International.

Australian society of today enables most of us to live well, but there are some deep flaws in our foundation as a modern democracy. One is that Australia is the only Commonwealth country that does not have a treaty with its Indigenous peoples. And another, pointed out by Gillian Triggs when she was awarded Australian Humanist of the Year for 2018:

Australia is the only democracy in the world without some form of national human rights act or bill of rights.

More recently in her 2018 book, Speaking Up, Triggs discussed examples of how the human rights of some Australians and those seeking asylum here have been or are being violated. These rights violations occur because Australia has no charter or bill of rights. This means that, when lawyers try to deal with these human right abuses, they lack the tools to make successful appeals on behalf of these people. One example of where the lack of legislated human rights has had a very negative affect is the treatment of asylum-seekers, particularly on Manus and Nauru. Another is the all-too-frequent incarceration of Indigenous people for trivial offences.

Humanists have long been advocates for human rights that are enshrined by appropriate legislation. We were very pleased when in 2006 the Victorian government enacted the Victorian Charter of Rights and Responsibilities. Similar legislation was passed in the ACT in 2004 and is under consideration in some of the other states, but the Commonwealth has been particularly resistant on this matter.

With the federal parliament so reluctant to act on a bill of rights, Triggs is of the opinion that a legislated charter of rights, similar to that enacted in Victoria, has a better chance of being passed. Its effect would be to moderate the almost unrestricted executive power that can be granted by parliament. This is a matter Humanists need to take action on.