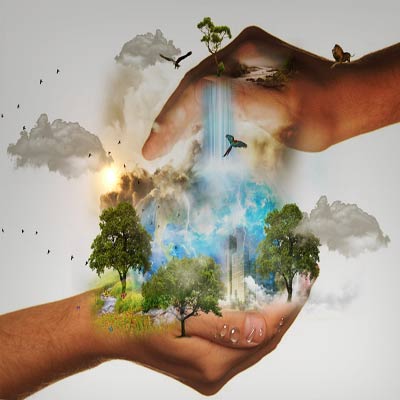 When Humanists describe their lifestance they need to place a central emphasise on an ethic of care towards Planet Earth – our home. While recognition of our dependence on and responsibility for the natural world is already a core Humanist value, it needs to be given greater prominence.

A pointer as to why we should do this is in the Amsterdam Declaration 2002, passed at the Congress that celebrated fifty years of international Humanism. The document sets out the fundamentals of modern Humanism in seven points. The final one reads:

Humanism is a lifestance aiming at the maximum possible fulfilment through the cultivation of ethical and creative living and offers an ethical and rational means of addressing the challenges of our times. Humanism can be a way of life for everyone everywhere. [Emphasis added]

Three current challenges that need urgent action are human-caused. They are climate change, loss of biodiversity and over-population.

Scientific data show that the whole Earth, viewed as a single system, is undergoing rapid unstable changes. The greenhouse gas CO2, mostly from burning coal, has risen to over 400 ppm, compared to 280 ppm in the early 1800s. This has contributed to a rise in global temperatures that are altering weather patterns across the globe and seriously affecting nature, e.g., recent hot summers have caused massive coral bleaching on the Great Barrier Reef.

The rising level of CO2 is also making the oceans more acidic. This reduces the ability of many sea creatures to lay down skeletons of calcium carbonate; and with thinner skeletons their survival is reduced.

Then there is the evidence of loss of biodiversity, as humans occupy more and more land for themselves and their food sources. Insect numbers have fallen 40 per cent. Many birds, mammals, reptiles, amphibians, etc., are facing extinction. Biologists are predicting we are heading for the Earth’s sixth major extinction, with human activity as the key causal factor.

While population growth has received less attention in recent decades, it is nevertheless an underlying issue of concern. It was treated as a very important issue when the international Humanist organisation was formed in 1952. Somehow, the advocacy for growth economics and our success at feeding the growing millions have diverted attention from over-population. Now, we are facing the consequences of too many people, using too many resources and producing excessive amounts of waste.

Even without the need to confront human-caused climate change, humanity is heading towards disaster, due to the loss of biodiversity. Losing species in large numbers destabilises the remaining interactions of each ecosystem.

After assessing the many effects of human activity on the Earth as a single, complex system, scientists are saying that we have entered a new geological epoch, which they are naming the Anthropocene. This is a new stage in the history of the Earth in which human activities are having a significant effect on the Earth as a total integrated system.

In other words, humans are irreparably degrading the conditions for life as we know it, on Planet Earth – our home. It is possible we may be bringing about our own extinction, or at least a collapse of a civilised way of life, as a result of our actions.

If Humanism is to remain an appealing way to lead a worthwhile and ethical life, our dependence on Planet Earth for our survival as a species requires us to act to preserve the viability of the Earth system.

An ethic of care towards the Earth requires us to change the way we live. This is likely to include switching to renewable energy sources, using biodegradable products, reducing red-meat consumption, setting aside substantial areas for wildlife parks, excluding fishing in the breeding grounds of sea creatures, and curbing population growth.

Idealistic young people have shown an active concern for effective action on climate change and loss of biodiversity. They are the future, and it is to them that Humanism as a life stance must appeal.