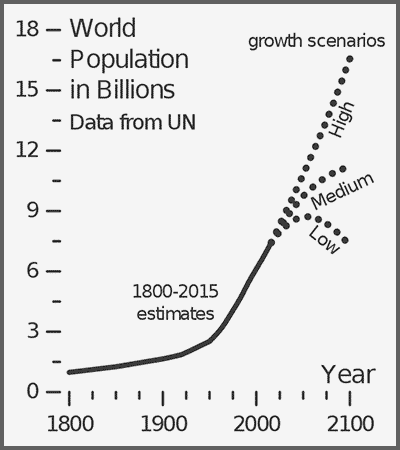 Humanity faces a turbulent future. Human-caused global warming and climate change are considered by many to be the main issue that needs urgent attention. Others point to the potentially destabilising shifts in world power, as the dominance of the US hegemony is being challenged by the rise of China and India. This shift in global power is currently being reinforced under the Trump presidency by unilateral decisions, e.g. recognition of Jerusalem as Israel’s capital, along with US withdrawal from international involvement. A current example is US resignation, in mid-June, from the United Nations Human Rights Council.

Among the other pressing issues are loss of biodiversity, diminishing supplies of freshwater and overpopulation. A look at the exponential rise in world population shows why we should be very concerned about the continued growth in the number of humans occupying and using up the Earth’s finite resources.

World population is estimated to reach 7.6 billion this year. As the table below shows, it now takes a little more than a decade for the next billion people to be added.

As the human population grows, most other species are being pressed into smaller and smaller areas, as human use of the Earth’s resources expands. The result is massive numbers of species going extinct, producing destabilized and threatened ecosystems.

The need to curb population growth was widely discussed in the 1950s, ’60s and ’70s. However, as techno-science applications improved food yields, the illusion that human ingenuity could solve all problems took hold. Indeed the number of people dying of starvation and famine has been falling, yet in sub-Saharan countries it is rapid population growth combined with drought caused by climate change that is creating millions of refugees. Many others are fleeing the war-torn areas, Syria being a key example. Both types of refugees are seeking safe haven in more developed countries like Europe, US and Australia. This is a massive humanitarian problem acerbated by unchecked population and climate change.

In adding to humanity’s problems, the flood of refugees has caused a backlash by some citizens in the developed countries, who are agitating for greater restrictions on the inflow of refugees. Italy’s new government is turning boats away, and Trump wants to turn Mexicans away at the US border.

In much the same way that governments and the international community are paying less attention to overpopulation, it seems to have slipped off the radar for Humanists as well. It is worth remembering that when IHEU was formed in 1952, those at the inaugural congress passed five resolutions, two of which called for action on the world population problem.

One policy urgently needed in Australia is a national population policy that takes into account the carrying capacity of this very dry, highly eroded and ancient land. Those who have spoken out this topic, like Tim Flannery (AHoY 2005) and Dick Smith, believe Australian has already exceeded its carrying capacity.

This issue won’t go away. Either humanity undertakes effective measures to curb population growth or begins preparing to face the destabilising consequences of too many people, struggling to survive on diminishing resources.